There were only a few clouds standing out against the bright blue spring sky; the wind was blowing steadily as a welcome relief to the hot, relentless sun; it was a perfect day for branding cattle.

Now, that’s my opinion as a bystander. I’m sure the workers in full-length clothing beg to differ.

It was my first time joining my husband and his family to brand our cattle. A few weeks prior, the heifers’ calves were branded and immediately followed by a nut fry. Although not wanting to miss out on some fresh Rocky Mountain Oysters, I was already committed to work at the steak house. Dang.

This cattle branding was the big one – some 500 calves were ready to bear the CC- brand. 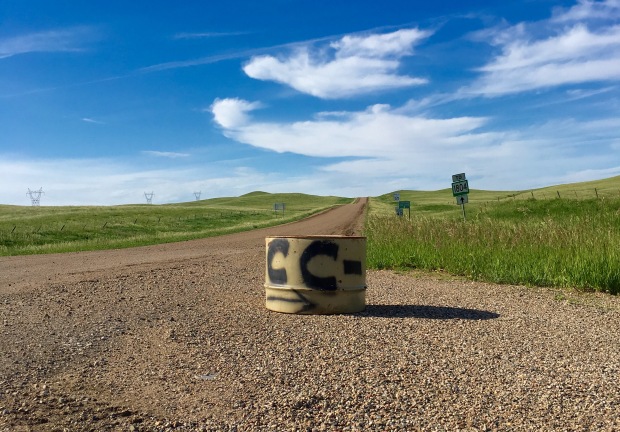 The day of, I was able to squeeze a few hours of work in while a crew of family, friends, dogs and horses worked the cattle moving them to the branding pasture and separating the calves from the cows. At this point, each calf had a colored ear tag that signifies ownership and a number that links it to a cow and shows the year it was born.

I was able to hitch a ride with my husband’s aunt, who was in charge of the big dinner* we were serving the herds of hungry men, boys and some seriously talented women.  No stranger to the hunger that accompanies a branding, we loaded her pickup with roasters full of baked steak, mashed potatoes, creamed corn, and a big ole container of lemonade, and we were off.

Winding our way up, down, and through the pasture to the corrals, we caught up with, then followed, those on horseback directing cattle through the gates.

Upon arrival, I quickly learned that branding day is about more than just the burning that big CC- brand into the side of the calves (a process I still wasn’t sure about up until this point…). The cows are guided through corrals where they received treatments and shots to ensure their continued health.

After the cows were taken care of, it was time to chow down. And no, the irony of serving steak at a cattle branding did not pass by me 🙂 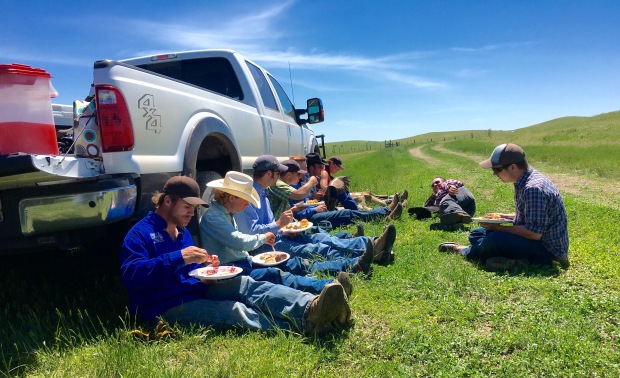 Ropers on horseback roped a calf, dragging it out of the corral to the branding area.

Holders, one at the head and one at the rear, held the calf down on its side.

Branders made trips between the heaters holding hot branding irons to each calf.

Medicators gave the necessary rounds of shots to each calf, and also sprayed the incision that is part of the next process…

Castrators were tasked with emasculating the male calves, and handing the set of balls over to the kids who carried them to an ice bucket, that ironically was purple and featured a princess on the front of it. 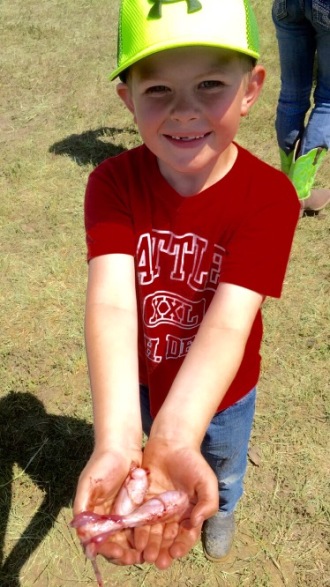 Then there were obviously the bystanders (me) watching this process for two or more hours. I busied myself with taking photos, running waters (beer) around, and making sure the kiddos had a good view to watch the process.

The calves were later turned back to pasture. Acting like nothing had changed, but now sporting their fancy cattle brand signifying that they were officially part of the herd.

It was a full, sunny, hot, busy day. Enjoying a margarita was the perfect way to take it all in.

Usually, the saying starts off with “When life gives you lemons…” but my supper inspiration actually starts off “When your neighbor’s dog craps in your yard…”

As much as I’d love a fenced, private back yard, looking out and seeing the empty lot behind us makes our yard seem that much larger.  Plus, it’s Vinny’s Frisbee course – so fencing is out of the question. 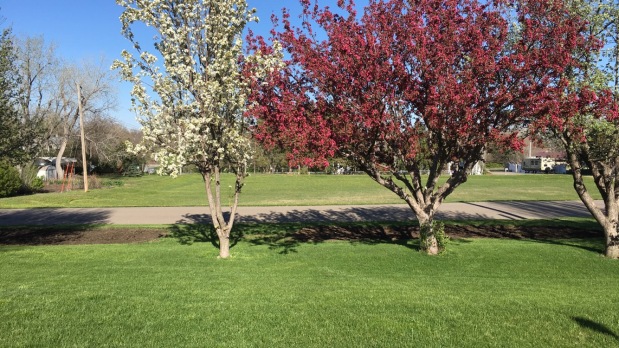 Without a fence, the neighborhood dogs (two large black labs and two small fat corgis to be specific) regularly come over to mark their territory over Vinny’s extensive marking.  Now that I’m trying my darnedest at gardening, I’m outside more and privy to witnessing the leg-lifting party that goes on when their owners aren’t looking.

But this day, the owner was outside. And his dog crapped in my yard.

So to apologize he gave me a bag of fresh-caught fish from the good’ole Missouri River. So what did I do?  Turned a “crappy” situation into grilled crappies over lemon noodles.

I’ll be here all week, folks. 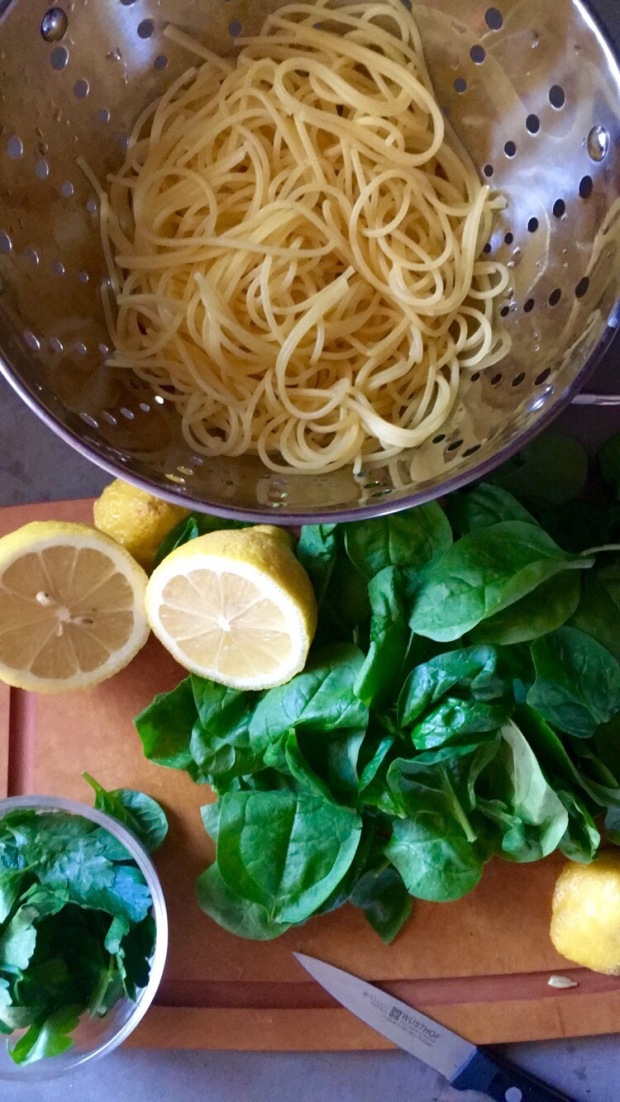 In all seriousness, I’m not the biggest fan of lemon.  Limes, yes. Lemons, not so much.  But I had two at the end of their life in my fridge, and a bunch of parsley starting to wilt.  Plus summertime calls for a bright, sunny interpretation for this fish.

I laid the fish out on paper towels to dry off while I boiled noodles to al dente and drained them.  In the meantime, I heated butter (the REAL stuff, people) in a cast iron skillet with minced garlic and fresh spinach.  After it cooked down for a few minutes, I tossed the pasta into the skillet and added the lemon and chopped parsley. 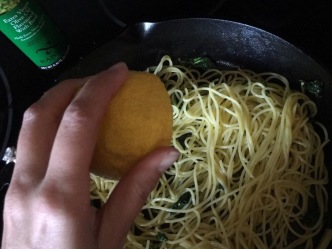 The fish I arranged over lemon slices in a grill basket, and topped it with tin foil.  I wanted to pseudo-steam, and the lemon helped so the fish didn’t fall through the grate, while imparting their flavor during the grilling process.  Hubby took it from here and manned his station at the grill.

One last toss of the noodles with some freshly-grated Parmesan and black pepper and it was ready to go!

I loved this dish even more because of the challenge of using up the forgotten ingredients in my fridge. I equally loved that the fish traveled no more than 15 miles from its watery home to my plate.  Oh and I didn’t have to clean it 😉 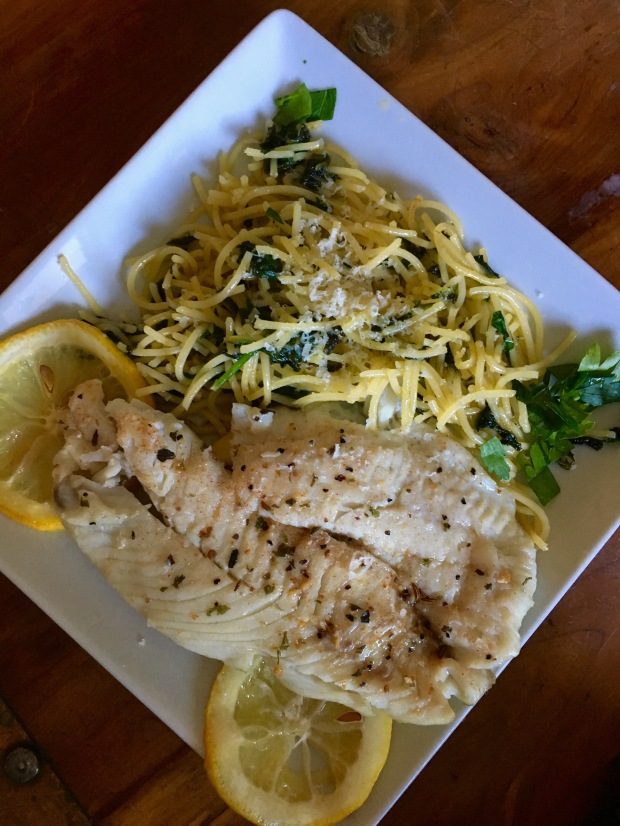 Summer is here. Bright, sunny, and deliciously so.